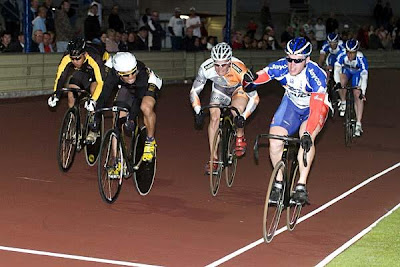 Jason Niblett (right) from Victoria takes out the men's UCI Keirin final ahead of Azizulhasni Awang from Malaysia and Scott Sunderland from Western Australia.
Posted by The Pocket Rocketman at 3:33 AM 2 comments: 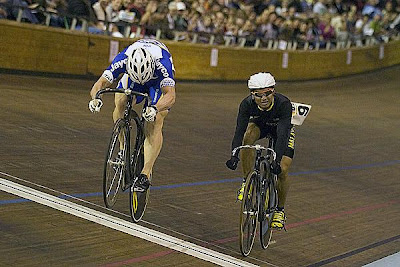 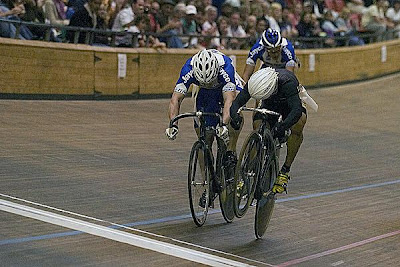 Malaysia’s Azizulhasni Awang pulls his customary mono on the line in the men's sprint.
Posted by The Pocket Rocketman at 3:24 AM No comments:

Posted by The Pocket Rocketman at 3:10 AM No comments: 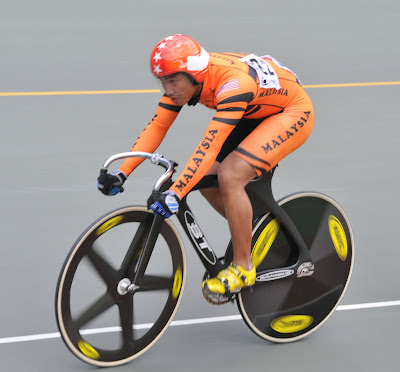 The class of the visiting Malaysians was on display on the opening night of the International Christmas Carnival at the ILT Velodrome last night.

The Malaysian sprinters, who all represented their country at the Beijing Olympics in August, were dominant in the invitation keirin.

In an exciting race Malaysia looked to have shut the New Zealand riders out with Younos taking the lead before van Velthooven manoeuvred his way through for second place with Webster third.

Olympic double medallist Hayden Roulston did not ride last night but could be in action tonight.

Olympian Marc Ryan won the division one elimination race from his New Zealand pursuit team mate Sam Bewley with world omnium champion Hayden Godfrey, who will take on a horse and a runner in an exhibition race at the Ascot Park Racecourse today, third.

The carnival continues tonight at 7pm
Posted by Tyazizul at 11:34 AM No comments: 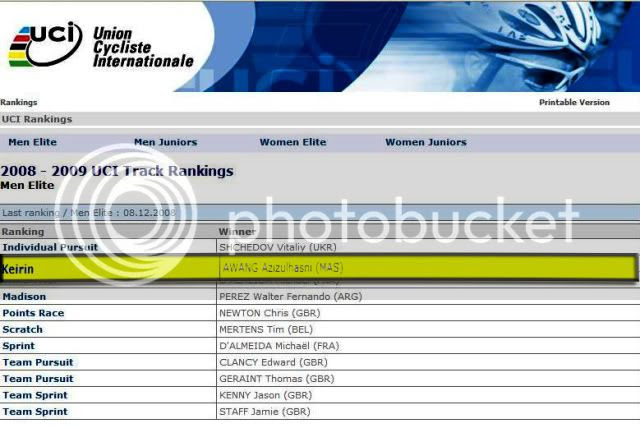 Posted by The Pocket Rocketman at 6:28 PM No comments: 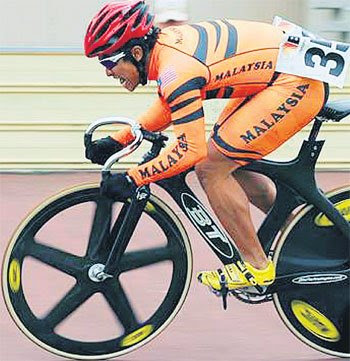 IT isn't about getting there, but about staying at the top when you get there.

And that is exactly what runs through the mind of new World No 1 keirin rider Azizul Hasni Awang after being confirmed at those heights in the latest world rankings released on Monday.

"Now, it is about maintaining that position and trying to get hold of the World Cup leader's jersey, which is something difficult, given our programme, but achievable. That is my target," said Azizul, when contacted in Melbourne yesterday.

Azizul sits atop the ranking with 570 points, 50 more than Francois Pervis of France, while triple Olympic gold medallist Chris Hoy of Britain is third, yet to start his new season. Pervis is the current UCI World Cup keirin leader's jersey holder.

The pint-sized Azizul is also the first Malaysian since Josiah Ng in 2005 to attain World No 1 status in the keirin.
That comes thanks to the reigning Asian keirin champion's explosive gold medal feat in Round Two of the UCI World Cup in Melbourne on Nov 20-22, and a series of wins in UCI graded grand prix events in Australia.

The national track sprints squad under Australian coach John Beasley will sit out the third round of the World Cup in Cali, Colombia this weekend, continuing their season with the fourth round in Beijing on Jan 16-18.

"Since we're missing the Cali round, my eyes are now fully on Beijing. Being World No 1 inspires me and I want to take that World Cup leader's jersey from Pervis," said Azizul.

"I think now, we can tell all Malaysians that they can start believing that we can achieve something, we can be right at the top. But this is not the climax yet. Our main goal is the World Championships."

The squad go to the New Zealand GP tomorrow and return to Melbourne for leg four of the Revolution series, before a final tune-up in Tasmania prior to heading to Beijing next month.
Posted by Tyazizul at 6:14 PM No comments: