Thank You ..Silver For Malaysians

there s nothing much i could say in breezing Poland...just to depict how happy i am to bring a medal to Malaysia eventually..Thanks for the support and pray..i 'm so excited to go back home..Malaysia here i come..!!even my luck in Keirin wasn't there...just to express how Syukur and HAPPY I am now....Thank God!Here i am,Silver medalist in World Championship in Sprint 2009!Lots more to learn ...especially in dealing with top riders...thank you once again everyone...
im so thankful and appreciate everything u guys had done to me....Malaysia Boleh!!!!Hopefully,the youngsters gonna realise that "size doesnt matter" dont simply give up !!Be yourself.....and confident !!!Salam from Poland...................!! 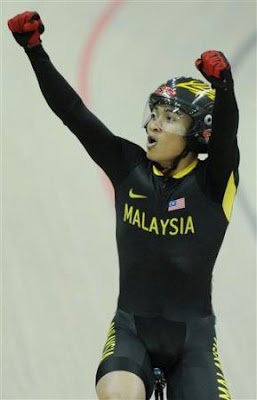 Posted by The Pocket Rocketman at 8:22 AM 35 comments:

Posted by The Pocket Rocketman at 1:04 PM No comments:

its was a fascinating results after we got no 6th for team sprint !!
we obtained what we need....as no 6th is our 1st target...

in regard, i break my own personal record and national record for my 1st lap :17.992
Thanks to everyone who supports and prays for me...Dont forget to watch me and others in next event..Especially my favorite event..Keirin!
Till then,,

Posted by The Pocket Rocketman at 10:35 PM No comments:

currently im in my final preparation for the WORLD!
ya..everyone is training harder day by day so do us..Malaysian Cyclists..me,Rizal Tisin and Josiah Ng..
i have less than a week to training in Melbourne before we depart to Poland on 15 March 2009..
then,it takes a week for us to training before the race days..
i hope there is a live telecast from Malaysia..because last year...it was..Astro,Eurosport..!
so as my last words,,,thanks a lot for ur encouragement and support...yea..i will do my best for all of u out there...and yeaa hoping for a GOLD still...its for u all..my beloved country..MALAYSIA!
MALAYSIA BOLEH!!!!!AZIZUL BOLEH!

AT long last, I really feel like the top athlete I always wanted to be.

I will start the World Championships in Poland at the end of this month as the World No 1 in the keirin, am the World Cup keirin champion and I have two World Cup gold medals to show for all the effort we've put in for so long.

But I'll always remember that it was never an easy task getting to this level and all the sacrifices I had to make just to get here, which isn't yet what I really want to achieve.

I still don't have a World Championships and Olympic medal to show, but what we've achieved now has at least earned our cycling team some respect, even from the Europeans and those who never thought we could do it.

The respect that we get now isn't the same as what we got three years ago when everybody just saw Malaysia as a small nation with small riders.
I never blamed them for that because even now, only our elite sprints squad has done something really worthy of international recognition.

Even so, for me as a cyclist, I don't see it as an achievement for the entire cycling scene in our country. We've achieved something, but we're not yet an established cycling nation.

To become that, we need to have a solid base right from the grassroots to the back-up and elite squads.

Right now, if we just look at our back-up squads, we don't really have the numbers and the quality yet. This is also due to many of our best cyclists choosing to quit the sport to focus on work or academic pursuits.

This is because the base and structure we have in the country isn't strong enough to sustain a big pool of riders, who can ride at a high level and sustain their involvement in the sport.

The sport loses out because there isn't an industry to keep the riders in the sport, unlike what we've seen in Australia or in Europe.

To start with, only now do we see cycling making inroads into the national schools agenda.

Although not yet fully established, we've waited long enough for cycling to be part of schools in our country, just like football, badminton and other popular sports.

Imagine if this had been done five years ago. We'd now have battalions of junior road and track riders throughout the country.

Grassroots development is the most vital aspect in cycling, the same as any other sport. I know many have said this before, but the reality is, we've not taken it seriously enough in Malaysia.

We need a strong grassroots for the simple reason to build the numbers in our sport. Having the numbers will inevitably make it more competitive and eventually the products will be athletes with higher capabilities.

Once we've established the grassroots, then we must also look at how to market the sport so that it is well supported by the masses and the corporate sector.

I attended the launch of the Road to London 2012 programme in Kuala Lumpur three weeks ago and it gave me some hope that our pursuit of success in the Olympics will receive adequate support.

The elite and high performance programmes can't just rely on the government, because the National Sports Council (NSC) cannot be overly burdened.

This is why there is much importance in bringing corporate sponsorship into the sport to contribute towards growth all round. Otherwise ,development will only rely on programmes run by the NSC.

In Malaysia, the trend is for the corporate sector to jump in and provide sponsorship, for example, just before a big event like the Olympics or Asian Games.

All the years that we go through preparing for the Games, we rely only on what the NSC or government can give us.

Imagine what we could do with an extra push to go further, with expanded budgets to go those extra kilometres in our preparation, to do more races throughout the year.

Not many look at long-term programmes to support athletes over a number of years leading to the Olympics. We need a bigger commitment from the corporate sector in order for our sport and athletes to grow.

And sport isn't just about the Olympics or Asian Games, it is a way of life each and every day.

So, there has to be real professionalism in all these areas if we are going to grow into an established cycling nation, or better still, a sporting nation -- which is my big dream.
Posted by The Pocket Rocketman at 12:31 AM 3 comments:

Sid Patterson Grand Prix 2009..Saturday February 28
one of the big grand prix in Australia same like Austral Wheelrace and lot more other races..
there were Franco Marvulli(world point race champion,six day race champion) and some of the Germany riders take apart in this race which is made this race more tougher..

Posted by The Pocket Rocketman at 9:21 PM 2 comments: 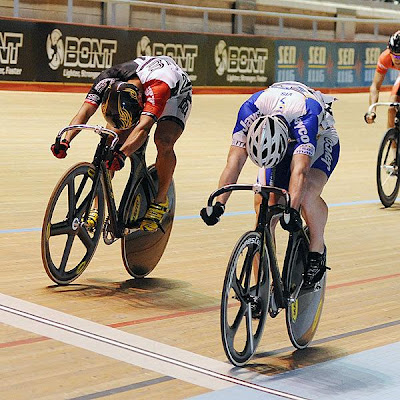 Results
1 Shane Perkins (Aus) Victorian Intitute of Sport
2 Azizul Awang (Mal) Malaysian National Team
3 Jason Niblett (Aus) Australian Insitute of Sport
lost by just few millimeters at the finishing line made me really frustrated..last year i became 2nd and this year still 2nd..huh..it was so long to wait next year to repeat it again..anyway,it still great race..and in that picture,i was wearing and testing my new OGK helmet that just arrived a day before that race..see that yellow stripes thing??that special made for me..world no1 keirin rider..all the top keirin rider at japan,they wear that stripe thing as the different between other class riders
Posted by The Pocket Rocketman at 9:04 PM 1 comment:

HE is the World No 1 in the keirin, UCI World Cup keirin champion and reigning double Asian champion and someone doesn't have an option but to be No 2 in Azizul Hasni Awang's life.
Smitten by the love bug, Azizul promises it will only serve to inspire him further rather than bog him down, more so now as his girlfriend Athiah Ilyana Abdul Samat is closer to him in Australia."We got to know each other through the Friendster online social network and met up at a gym when I was home a year ago. We've been getting closer with time," said Azizul.With uncertainty over whether Britain's Chris Hoy will recover from a hip injury in time for the UCI Track World Championships in Pruskow, Poland on March 25-29, Azizul is among the hot favourites for the keirin gold medal.Malaysia line up with the possibility of registering two of Malaysia's first ever World Championships medals through Azizul and 1km time trial specialist Rizal Tisin.
Rizal too is on top form, having won the gold medal in Round Three of the UCI World Cup in Beijing in January, while the duo will team up with Josiah Ng for the team sprint in which Malaysia should be good for a top eight finish.Questions have been asked of Azizul's focus for the World Championships, more so since Athiah Ilyana moved to Australia to further her studies at the University of Geelong, Deakin last month."Some people may think this will disrupt an athlete's focus. But for me, she provides inspiration and she's very understanding. She knows what I want to achieve as an athlete and she supports me all the way," said Azizul."Having a girlfriend does not necessarily mean an athlete loses focus. That matter has never crossed my mind. It depends on the athlete."As far as his form is concerned, Azizul maintains the team have had just one major goal this season, which is the World Championships, and that is all everything is geared towards.
Posted by The Pocket Rocketman at 9:01 PM 1 comment: