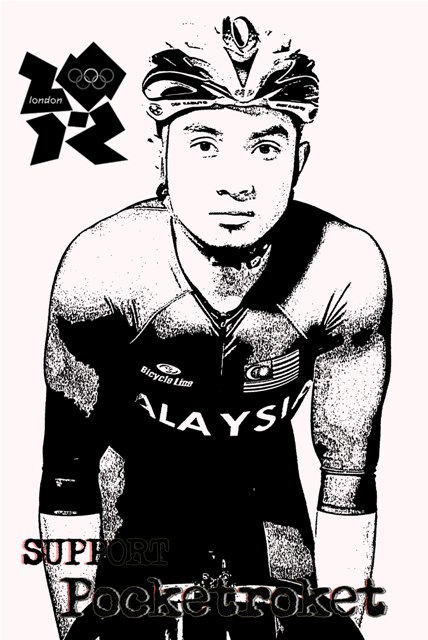 AZIZULHASNI Awang is, barring a bandaged right arm, as fit and ready as he could be for his bid to create history in the London Olympics. Only lacerations on the arm remain from the training accident he suffered last week and team manager Datuk Naim Mohamed said the 2010 Asian Games keirin gold medallist has a confident look about him. "We all know that the Olympics are not easy but self-confidence is very crucial and I am happy to say that Azizul has this in abundance," said Naim at the Games Village yesterday. With Malaysia's road challenge, as expected, fizzling out, all eyes are on Azizul as he has proved that he can match the world's best by winning the keirin silver at the 2011 World Championships. His performances in the World Cup have also been inspiring but that was all before he suffered the horrific injury last when a wood pierced his calf. That virtually ended his 2011 season but Naim said Azizul has forgotten that injury and even last week's crash didn't affect him. "We were afraid that the crash would not only hamper his training but also have a psychological effect on him but he has proved that he is not going to allow minor issues from jeopardising his challenge." Naim said coach John Beasley has started to taper Azizul and Fatehah Mustapha's training as it is a matter of fine-tuning now. "They have trained hard and now it is all about the competition. Fatehah, too, looks good after initially feeling a little overwhelmed with the thought of competing in the Olympics." The Malaysian team now await the respective draws as they will be crucial in deciding the gameplan of the riders. "The draw for an event is normally made a day before and who Azizul and Fatehah are drawn with will determine what strategy has to be employed. Azizul, however, doesn't have to worry about drawing the big guns in the first round as his ranking is high," added Naim. The keirin, Azizul's targeted event, has 18 riders who will be split into three groups in the first round. The top two from each heat will advance to the semi-finals while the remaining 12 will be involved in two repechages to determine the next six. The top three for each of the two semi-final heats will advance to the final with the losing six going for the 7-12 playoffs. Fatehah will be first in action as the women's keirin is on Friday while Azizul's campaign will start with the sprint on Saturday, an event which will be contested over three days. "There are some who feel that Azizul shouldn't take the sprint seriously but Britain's Chris Hoy participated in three events in the Beijing Games and won all three. This is a decision which Azizul and Beasley will make." The keirin will be on Aug 7, with the final scheduled for 12.50am the following day in Malaysia and if he does make the final, Azizul knows that the whole nation will stay up.
Posted by Tyazizul at 3:15 PM